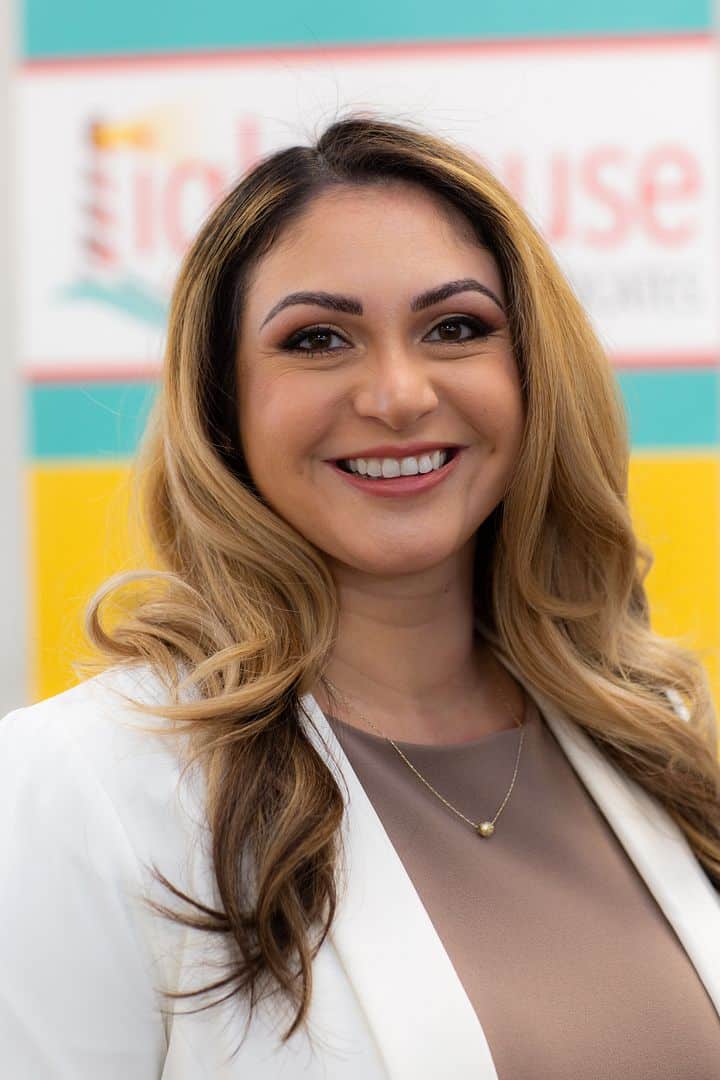 Tell us a little bit about yourself. Where are you from and what is your background?

I am originally from Mexico and traveled as an immigrant with my family to the United States when I was 12. I grew up in Grandville, MI; attended GRCC, GVSU, and Aquinas. In 2019, I became a citizen and decided to use my voice to advocate for other immigrants in our community, that’s when I became the Executive Director at Lighthouse Immigrant Advocates.

Is this where you thought you would be when you were in elementary school?

Absolutely not! I thought I would travel for work, and as an immigrant, that dream was far from the truth. I underwent an immigration process of roughly 20 years during which I was not allowed to travel outside of the United States.

What is the most engaging part of your current work?

I love continuing to build onto my skillset of communication, public speaking, and relationship building. The most rewarding relationships I have built are with our team and with community partners.

What is a significant experience that has shaped how you lead today?

Being an immigrant, I learned how to be innovative and flexible. This has shaped my leadership style to be an energetic force for my team. I focus on results rather than following a process. I believe each individual can arrive at successful results through diverse methods.

Tell us about someone who has played a significant role in your journey (mentor, boss, coach) – growing you and helping you advance?

One person who has been a great mentor has been Mike Mitchell. His positive leadership has encouraged me to do things outside of my comfort zone, often leading to successful projects and career moves.

Is there anything you wish you had known earlier in your journey?

I wish I knew that it is okay to deviate from a plan, and that career paths are not linear.

What’s something people would be surprised to know about you?

I can be easy-going, but I have a strong character.

If people see you out on the town and want to buy you a drink, what should they send over to your table?

If someone sees me and about, I enjoy chatter and small talk. If they wish to buy me a drink, anything mixed with coffee or kahlua is always a winner.

Lighthouse Immigrant Advocates
Read the next Interview
Back to the Blog

We offer a host of different learning opportunities and we’d love to keep you posted.

We use cookies on our website to give you the most relevant experience by remembering your preferences and repeat visits. By clicking “Accept”, you consent to the use of all cookies while browsing www.agcollaborative.com
Cookie settingsACCEPT
Manage consent

This website uses cookies to improve your experience while you navigate through the website. Out of these, the cookies that are categorized as necessary are stored on your browser as they are essential for the working of basic functionalities of the website. We also use third-party cookies that help us analyze and understand how you use this website. These cookies will be stored in your browser only with your consent. You also have the option to opt-out of these cookies. But opting out of some of these cookies may affect your browsing experience.
Necessary Always Enabled
Necessary cookies are absolutely essential for the website to function properly. This category only includes cookies that ensures basic functionalities and security features of the website. These cookies do not store any personal information.
Non-necessary
Any cookies that may not be particularly necessary for the website to function and is used specifically to collect user personal data via analytics, ads, other embedded contents are termed as non-necessary cookies. It is mandatory to procure user consent prior to running these cookies on your website.
SAVE & ACCEPT